Dusan Jovcic, the founder of Kerber Games gained his first work experience during university (Faculty of Political sciences) as well as on the radio as a journalist and host. After that he worked in multiple agencies and met David Bilobrk working in a CSR agency when they started the story of a social board game which is in many ways different from other board games. This game guarantees fun and brings buckets of laughs to anyone who plays it, so be sure to try it out. Dusan says that he worked on Kerber Games and Final Challenge even before they were put into existence, but in a different way and in his spare time.

How and with whom did you come up with the idea of creating a board game?

The initial concept for the game was developed by Zoran Simanic and me, with the idea to make David Bilobrk come on board and work with us on this project. From this idea we created the Final product (ha, you see what I did there). Besides the three of us, a lot of our friends and colleagues helped with the development of the game.

Is the board gaming culture developed enough in Serbia?

The culture of board gaming is alive and well in Serbia, but a lot of the population is used to the classic games like chess and Monopoly, it all depends on the games that were available to them during the time. If we compare our situation with a country such as Germany for example, we can see that we are not even close to their number of players and the number of board games produced. Nevertheless, in the past 20 years or so, board games have become an integral part of our lives, and not just with board game enthusiasts but also with a wider population.

What was your motivation to apply to the 2020 Delta Business Incubator (known today as D Inkubator)?

The question isn’t what but who. The person responsible is Tanja Vasojevic who almost forcefully made us fill out the application. As creatives and representatives of the gaming industry at first we thought that this wasn’t really the right fit, but later on we realized that we had no reason to second guess the program.

What’s the advantage of this program compared to some other similar programs?

Speed, operability, the ability to adapt to the needs of each team, a wide circle of collaborators and logistic potential. Literally this big company is borrowing its suit to a small company while it grows. Something I haven’t seen anywhere else.

During the program you had the opportunity to work with various mentors, what aspect of business did they help you most with?

Our mentors are amazing people and top experts in their fields. They helped us most with business planning, financial planning, marketing and setting up a base as a legal entity, since these are the things that are often overlooked when you run a creative business.

Your team got an investment for business development. How does it feel to have your idea made into reality?

The feeling is great, similar to when you solve a really complex puzzle or a tough mathematical problem and your crush likes you even more because of it. However, as the process of mentoring brought us closer to some practical aspects of starting and running a business, there was not much time to sleep on our laurels, because the investment meant that everything we planned now needs to be implemented.

Where can we buy Final Challenge?

We are currently in the phase of launching the game through direct sales and through sales through partners. The game will be available in Serbian and English and will be available for purchase at several locations. For example through our website kerebergames.com as well as on the Ananas e-commerce platform ananas.rs. In addition, you can expect it in Laguna bookstores as well as in all stores that sell board games  in Serbia.

What are your plans for further business development?

We are currently working on getting Final Challenge into as many hands as possible, so we can truly utilize the potential of our first game. During testing we realized that the game has great potential in team building, so we’ll pay some attention in the future to developing special service packages for companies that will include a version of Final Challenge. In addition, we are working on finding publishing partners on markets that we still haven’t touched.

What is your advice for teams who want to start their own business?

First of all, pay attention to the structure of your team and set as realistic expectations as possible with yourself. Also, the advice "better done than perfect" was very important to us and if we had adopted it earlier, life would have been much easier for us. It is also very important to test everything you make, ideally the whole product or some of its features as soon as possible.

How would you invite other Startups to join the program?

Don't miss the opportunity to get something that costs a lot of money for free through this program. Everyone who thinks that their product is not good enough or that it’s not ‘on-brand’ for this competition - go ahead and apply, I’m sure you’ll be pleasantly surprised.

*The original interview was featured on the D Inkubator portal. 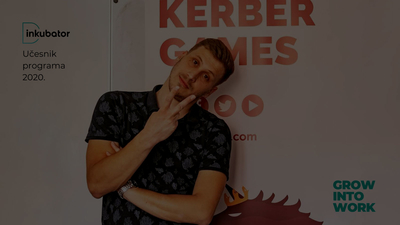 Dusan Jovcic for Netokracija: How our little board game studio grabbed attention at the 2021 Essen Spiel

Over 93,000 visitors, fans of board games and everything geeky paraded ...

A visit to a this page could generate the following types of cookie.

These cookies are essential in order to enable you to move around the website and use its features, such as accessing secure areas of the website. Without these cookies services you have asked for, like shopping baskets or e-billing, cannot be provided.

These cookies allow the website to remember choices you make (such as your user name, language or the region you are in) and provide enhanced, more personal features. For instance, a website may be able to provide you with local weather reports or traffic news by storing in a cookie the region in which you are currently located. These cookies can also be used to remember changes you have made to text size, fonts and other parts of web pages that you can customise. They may also be used to provide services you have asked for such as watching a video or commenting on a blog. The information these cookies collect may be anonymised and they cannot track your browsing activity on other websites.

These cookies are used to deliver adverts more relevant to you and your interests They are also used to limit the number of times you see an advertisement as well as help measure the effectiveness of the advertising campaign. They are usually placed by advertising networks with the website operator’s permission. They remember that you have visited a website and this information is shared with other organisations such as advertisers. Quite often targeting or advertising cookies will be linked to site functionality provided by the other organisation.

Cookies can be managed via the web browser settings. Please, see you browser help how to manage cookies.